The Patrologia Orientalis Database (POD) is the Online version of the famous collection of patristic texts from the Christian East, including works, recorded in non-Latin languages, that come from geographical, cultural, or religious contexts somehow linked to Rome or the Eastern Roman Empire.

The database allows users to access texts included in the Patrologia Orientalis (PO) series in two forms:
the original text and a searchable translation.

The database is up-to-date and contains all the volumes of the printed collection until vol. 251 (2020).

The user can search for items (such as keywords or quotes) in the language into which a text was translated in the PO. All the texts in the PO are searchable, and the reader can check the translation with the original text visible alongside as a non-searchable PDF file. 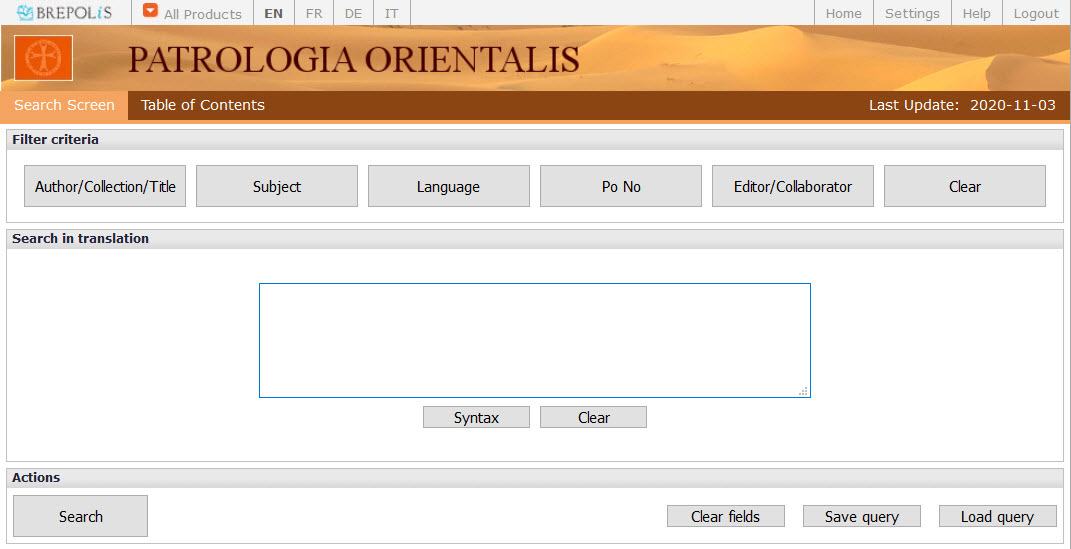 The Patrologia Orientalis is a source of prime importance for many disciplines: in Patristic Studies, in History, in Theology, in Canon Law, and so on.
Numerous major works are included in the Patrologia Orientalis. It is only right to draw attention to the Armenian, Copto-Arabic, Ethiopic, and Georgian Sinaxaria, such as the commentated edition of the Ṣoma Deggua and the Ethiopic Me‘eraf, and to Bar Hebræus’s complete encyclopaedia, also known as Candélabre du sanctuaire. The complete collection of the Homiliae Cathedrales by Severus of Antioch is outstanding, published in the Syriac translation by Jacob of Edessa, in the original Greek when extant, otherwise in the Coptic version.

History and related disciplines occupy an important place in the Patrologia Orientalis, which contains, for example, the History of the Patriarchs of the Coptic Church of Alexandria, the Histoire of Yaḥya ibn Sa‘id d’Antioche, and the Histoire des sultans mamlouks by Al-Mufaḍḍal Ibn Abi’l-Faḍa’il. The Documents pour servir à l’histoire de l’Église nestorienne and the Chronique de Séert can also be cited.

Hagiography is, without a doubt, an important element, with examples such as the Lives by Severus of Antioch in Syriac, Arabic, and Ethiopic, the Ethiopic lives of the saints (Atti di Banadlewos, Gädl di Abuna Demyanos), and the Miracle de Saint Michel à Colosses.

Canon law is mainly represented by the Canons d’Hyppolite and Cent-vingt-sept Canons des Apôtres, in their Arabic versions.

The Works of the Church Fathers are obviously at the forefront with, for instance, the example of the monumental edition of the Homiliae Cathedrales by Severus of Antioch. The series also includes the principal works of the Fathers preserved in translation into one of the eastern languages, such as Ephrem’s Demonstration of the Apostolic Preaching and Hymns in Armenian, or the Kephalaia Gnostica by Evagrius Ponticus. Original works are available, unpublished for the most part, especially in Syriac. Examples include the writings of Jacob of Sarugh, Narsai, and Philoxenus of Mabbug, and the Lettre sur les trois étapes de la vie monastique by Joseph Ḥazzaya. The De Deo of Yeznik of Kołb is also worth noting.

Theology is present in the works of numerous Syrian and Arabic authors who deal with questions of dogma in the Nestorian and Monophysite Churches, and in texts linked to controversies between Christians and Jews or Christians and Muslims.
There are a substantial number of homiletics, especially in Syriac, but also ones from Egypt, such as the Homélie sur l’Église du Rocher published in the (very fragmentary) Coptic version, in Arabic, and in Ethiopic.

Liturgy is very well represented. Foremost are the Synaxaria, the Lenten antiphonary and the Ethiopic Divine Office, the Armenian lectionary (cašoc‘), the Lectionary for Holy Week in Bohairic Coptic, the Greek Euchologium sinaiticum, Le Grand Euchologe du Monastère Blanc in Coptic, and the Eastern martyrology.

Its contribution to the study of Sacred Scripture is important because of its lectionaries, exegetical Catenae, several apocryphal tests (Martyre de Pilate, Coptic fragments, and so on), the Book of Job in Coptic, the Paralipomena in Ethiopic, and the edition of the oldest examples of the Prophets and the Gospels in Georgian.

This year’s update includes the Ge’ez translation of Severus ibn al-Muqaffaʿs Kitāb al-Īḍāḥ, the Sahidic  version of Proto-Isaiah, and the three volumes of the Patrologia Syriaca.