In the early Middle Ages, literate individuals in and from the Celtic periphery of Europe (Ireland, Wales, Brittany, Cornwall, Scotland and the Isle of Man) wrote many and varied Latin works constituting what can arguably be seen as a distinctive literature, whose unusual vocabulary, grammar and phrasing (to say nothing of subject-matter) made it into what has been called “one of the most curious and interesting phenomena of medieval philology”. In an attempt to codify this usage, the Royal Irish Academy has been working actively since the late 1970s towards producing a definitive Dictionary of Medieval Latin from Celtic Sources (DMLCS) — part of a Europe-wide movement to publish lexicons of the medieval Latin of specific national areas.

From the outset DMLCS has been computer-based, having as a second objective the establishment of a permanent electronic database containing the whole corpus of Celtic-Latin literature from the period 400-1200 A.D. (about 1300 separate texts, varying from fragmentary inscriptions to learned treatises hundreds of pages long). This full-text database, historically held in the Queen’s University, Belfast, is richly marked up — for non-Latin words, categories of quotation, etc. — so as to be of maximum use to the lexicographer. But it was always envisaged that, as its construction proceeded, the archive would come to be of value to scholars in other disciplines as well — to the editor of texts, the syntactician, the researcher into geographical or chronological distribution of usages, the historian interested in the transmission of ideas or texts, and to many others. The question was how to make it available to them.

That question is being answered with Brepols’ publication, from the DMLCS database, of a series of three cumulative editions of a full-text Archive of Celtic-Latin Literature. Originally modelled upon Brepols’ existing Library of Latin Texts (Cetedoc Library of Christian Latin Texts), this was designed to constitute with that corpus the beginnings of a pan-European electronic library of patristic and medieval Latin material. The initiative is proceeding as follows: 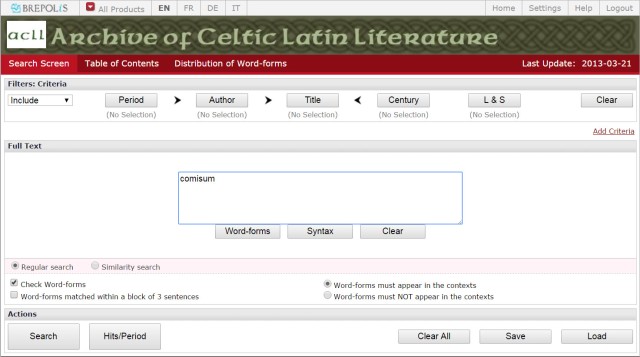 For more information or news, please go to the blog Posts.

See also the Library of Latin Texts, the Aristoteles Latinus Database, the Monumenta Germaniae Historica, the Database of Latin Dictionaries and the Dictionary of Medieval Latin from British Sources.