The Monumenta Germaniae Historica was founded in 1819 by the Gesellschaft für Deutschlands ältere Geschichtskunde. It is without doubt one of the most prestigious editorial undertakings for the critical publication of medieval historical texts.
In more than 300 volumes, covering the widest possible range of historical documents, divided into five major Series (Scriptores, Leges, Diplomata, Epistolae and Antiquitates) and into 33 Subseries, the Monumenta not only continues its editorial programme but it has established for all Western scholarship a standard for critical editions.

The powerful search engine developed by the Centre ‘Traditio Litterarum Occidentalium’ and Brepols Publishers allows unparalleled exploitation of this important body of texts, permitting in-depth searches of the corpus. Moreover, the integration of the eMGH into the Brepolis Latin platform offers the opportunity to carry out searches simultaneously with other collections of texts bringing together a total of more than 9,000 works (Library of Latin Texts, Aristoteles Latinus Database, Archive of Celtic-Latin Literature), and allows the user to search Latin reference dictionaries (Database of Latin Dictionaries). 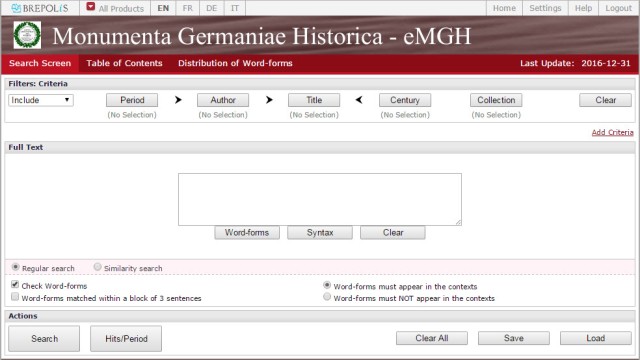 For more information or news, please go to the blog Posts.

See also the Library of Latin Texts, the Aristoteles Latinus Database, the Archive of Celtic-Latin Literature and the Database of Latin Dictionaries.